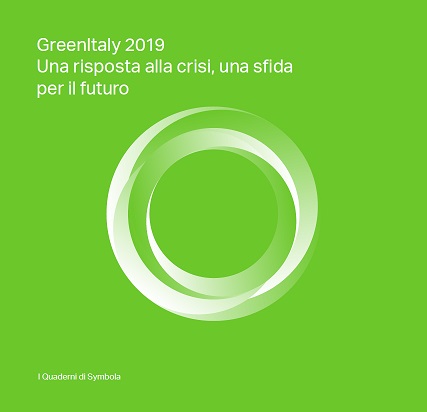 The GreenItaly Report by Symbola Foundation – Unioncamere has documented a record of eco-investments in Italy in the last 5 years. Almost 300.000 companies are involved, with a growth of 7.2 points.

A record for eco-investments. Despite the tough economic situation, the “GreenItaly 2019 Report” depicts a different and prosperous image of Italy, which is capable of arranging resources for sustainability purposes. The analysis, which is carried out by Symbola Foundation and Unioncamere, is supported by Conai, Ecopneus and Novamont, is in partnership with Si.Camera and Ecocerved and is endorsed by the patronage of the Ministry of the Environment.

According to the report, which was presented in Rome in October 2019, over 432.000 Italian companies have invested in green products and technologies in the last 5 years to reduce the environmental impact, save energy and contain CO emissions by the end of 2019. In particular, these are 21.5% of Italian companies; this is 7.2 points higher than the numbers acknowledged in 2011. This had significant consequences on the labour market. Indeed, the number of green jobs in Italy surpassed 3 million: 3,100,000 units, 13.4% of the total employment. In 2018, green jobs grew over 100.000 units compared to 2017, with an increase of 3.4% compared to the rise of 0.5% for other professions. Personal data, which reveal the virtuosity of youth entrepreneurship, are interesting: indeed, 47% of companies led by under 35 promoted eco-investments.

This website uses cookies to improve your experience while you navigate through the website. Out of these cookies, the cookies that are categorized as necessary are stored on your browser as they are as essential for the working of basic functionalities of the website. We also use third-party cookies that help us analyze and understand how you use this website. These cookies will be stored in your browser only with your consent. You also have the option to opt-out of these cookies. But opting out of some of these cookies may have an effect on your browsing experience.
Necessary Sempre abilitato
Necessary cookies are absolutely essential for the website to function properly. This category only includes cookies that ensures basic functionalities and security features of the website. These cookies do not store any personal information.
Non-necessary
Any cookies that may not be particularly necessary for the website to function and is used specifically to collect user personal data via analytics, ads, other embedded contents are termed as non-necessary cookies. It is mandatory to procure user consent prior to running these cookies on your website.
Functional
Functional cookies help to perform certain functionalities like sharing the content of the website on social media platforms, collect feedbacks, and other third-party features.
Performance
Performance cookies are used to understand and analyze the key performance indexes of the website which helps in delivering a better user experience for the visitors.
Analytics
Analytical cookies are used to understand how visitors interact with the website. These cookies help provide information on metrics the number of visitors, bounce rate, traffic source, etc.
Advertisement
Advertisement cookies are used to provide visitors with relevant ads and marketing campaigns. These cookies track visitors across websites and collect information to provide customized ads.
Others
Other uncategorized cookies are those that are being analyzed and have not been classified into a category as yet.
ACCETTA E SALVA